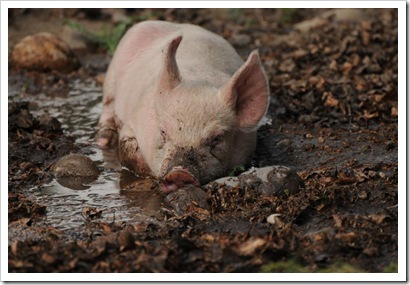 Our piggy has arrived! In 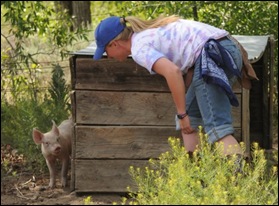 years past, we sometimes have had two, but this year, this old boy is the sole recipient of all the ranch leftovers—that’s one lucky pig! Here, Carolyn takes a break from Gymkhana to welcome him into the Bar Lazy J fold.  As far as pigs go, we have to say this one is pretty dang cute. Welcome little porker!

**Disclaimer: All imagery and “war paint” is symbolic ONLY of the lack of artistic ability in our wonderful staff and their uhhh…..silliness.** 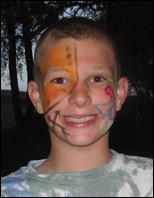 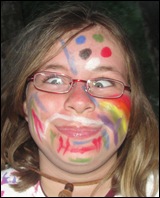 *Please also note that when you tell children, “You can paint whatever you want,” you are subjecting yourself to having them laugh at you. Here, “Q” was given the Indian name  ‘Mike’s Twin’. 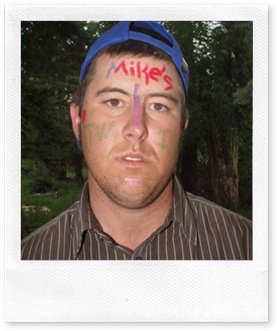 Followed by a photo that was destined to end up on the ranch blog….(“Q” and Mike are two of our wranglers who have spent every week explaining to everyone that one is not the other. They are similar in build, features and demeanor, so it has become the topic of many laughs while they retrain each new week of guests!) They’re BOTH fantastic, though, so it’s a compliment both ways!

Sometimes you have to grin and BEAR it—even when you have a bear! In years past, we’ve had our share of encounters with these usually docile guys. Some who wanted grain—some who even wanted our pig! This time of year, the younger bears will often make their way into public places (since they have yet to fear humans) to fill their empty tummies after a long hibernation. Usually, once their food source is blocked, they move on, but this year, our buddy has spent some extra time (apparently enjoying the ranch life like any vacationer would!) And we’ve found he has a particular weak spot for Eddie’s cookies…(but who doesn’t??)…. Let’s just say there have been more than a few missing rolls of frozen cookie dough out of the walk-in freezer the past few nights!  (Hmmmm….how long can we blame this on the bear do you think?) 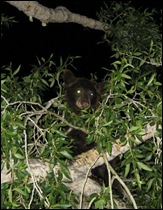 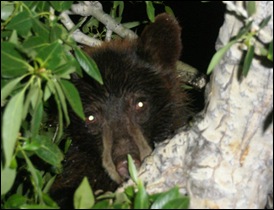 We’ve been moving further into the high country to clear the trails and last week we took some long-time returnee guests with us along for the job. Meaning, they watched while we worked, and we were able to get them up to one of the most incredible spots around. We had our work cut out for us getting there, but it was worth it! 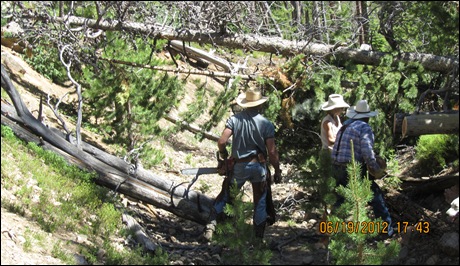 So, what is it about being at 12,000 ft above the whole world that makes a regular old sack lunch taste like the finest feast you’ve ever had? Perhaps it’s feeling like the king of the world or maybe just the pure peace and happiness that rises up inside you. But whatever it is, it’s the truth! Best meal EVER. 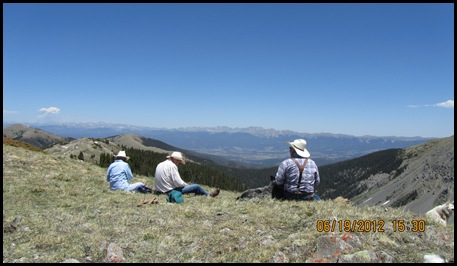 And just as a side note, many folks have asked about the fire situation and we are a good ways from any of that thankfully. You can see the skies are still Colorado blue in our neck of the woods, but our thoughts are with those who have lost a great deal and the firefighters who are risking their lives to help them. Here, Jerry is actually looking off in the direction of the fires in Ft. Collins and the plume of smoke above the mountains there to the far left is what you can see of the fire three hours away from us. It is on the other side of the mountain pass, but you can still see the smoke from where we are so high. We hope rain will come to come to all of them very soon. It’s been one dry summer.

Our wrangling staff! Not a bad lookin’ bunch! 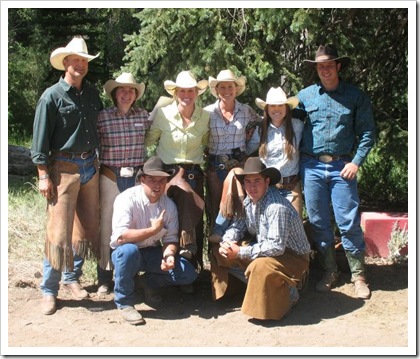 Oh and the bears aren’t the only bold animals around here lately. I think this one is the fiercest one yet. 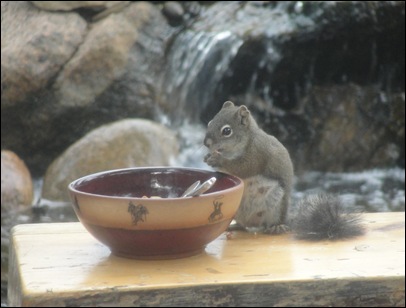 Here he is harmlessly nibbling at the mixed nuts bowl, but he too has been seen ransacking the cookie box! He’s no dummy! (The clincher was one day when he ran back 4 or 5 times to retrieve cookies and then went and “hid” them in his tree where one of the ranch dogs was waiting to steal them as soon as he left for the next cookie. It was quite a show. And perhaps for a moment, we all wondered if they weren’t working together. But then what’s in it for the squirrel? Wait….protection! Mystery solved. Hence the bold squirrel sitting at the nut bowl!!) 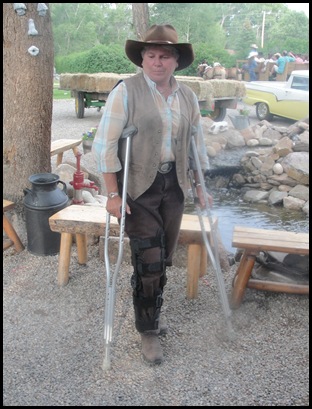 Last, but not least, Cheri is doing great and healing much faster than they thought (the doctors thought—she knew she was gonna kick this thing in the rear). She’s moved to using crutches now and can bear weight as she feels comfortable. We can expect her back in the saddle by the end of July at the latest and you can bet she’s gonna try for even sooner than that!

Now don’t go thinking we forgot about that big surprise happening here pretty soon. Just a little bit longer and we’ll let you in on the news—it’s worth the wait! Trust us!