Jerry and Cheri are proud of what this ranch has become to so many others. And they deserve to be. They never could have guessed when they purchased the Bar Lazy J in 1995, that it would come to mean as much to their guests as it did to them.  Although the ranch already had her own “magic”—which is what drew them to it—there was quite a bit to be done. Seventeen years ago, they could have only dreamed that it would be what it is today.  But when you live on the river in the mountains giving people the vacation of a lifetime, where do you go when it’s time to “get away”?      In 1995 when Jerry and Cheri left their lives in Michigan, they sold everything and risked a great deal to make the Bar Lazy J their own.  Born and raised in Michigan, Jerry traveled the country as a sales manager for a large direct marketing corporation. Cheri was a high school physical education teacher and a track, cross country and swimming coach.  Great-Aunt May didn’t pass away and leave them the family fortune—they earned every penny.  And it was with great faith (and hope) that they sold their homes and possessions and completely rearranged their lives.  But they both whole-heartedly believed the risks and sacrifice were worth it. (Aren’t we all so glad they did??)  So 17 years later, you can imagine their surprise when the couple who had purchased their lake house from them all those years ago, called to let them know they were going to sell it. And what a joy for Jerry and Cheri to now have the means to buy it back !        The house on Loon Lake is now their home away from home for several months during the off-season of the ranch. Since their repurchase, they have done quite a bit of work to restore the North Woods look and feel. With knotty pine interior, hard word floors, a high ceiling and stone fireplace, along with the woodsy-themed interior, you can imagine why it’s easy for them to feel at home while they are away from the ranch—and not just because it’s a familiar place to them.  There is a peace and serenity sitting there on their deck overlooking the lake similar to what you feel overlooking the river at the ranch.       Here they are heading out just a few days after the close of the ranch! 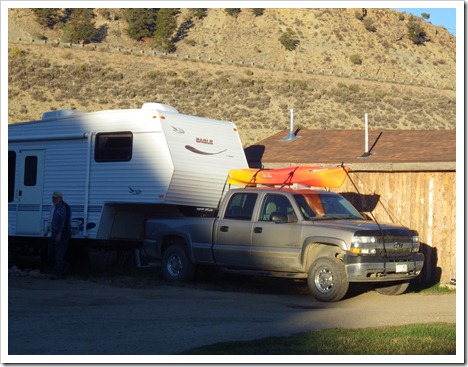 So since early October, this is where Jerry and Cheri have spent a much- deserved lengthy vacation. Cheri came back a few weeks earlier than Jerry to once again begin the basketball season coaching here at Middle Park High School in Granby.  And after finishing up a few projects and spending a bit more time with family, Jerry headed back with Rocky and Queen to make it just in time for Thanksgiving. And for that we are thankful!      But we all know Jerry and Cheri are experienced sharers of the places that they love so much—so it comes as no surprise that starting this year, they have begun offering the house on Loon Lake as a rental property during the summer while the ranch is open. With a capacity to sleep 12, they knew it would be a great place for large or multiple families to get together and make some memories as well. (They have a way of providing those opportunities, don’t they? I’m on to them…..) As a BONUS—anyone who has been a guest of the ranch either in the past or currently on the books, receives a 20% discount on their stay! So check out the site if you’re interested in a future getaway or even if you’re just interested in the great pictures of this beautiful property. Words don’t do it justice. Here’s the link!  http://www.vrbo.com/424728